Posted by rochisam on Friday, 16 November 2018 in Climate Change

The Woosley Fires Are The Size Of Denver 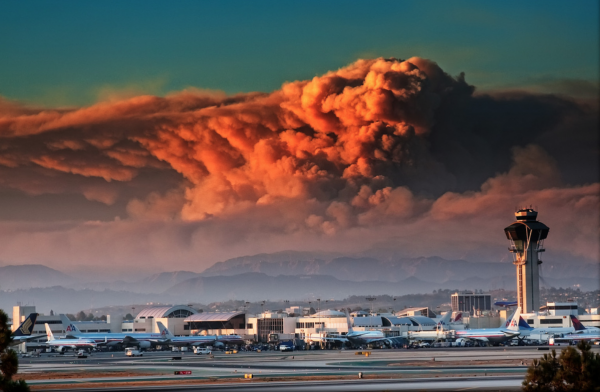 At 97,620 acres, the Woolsey Fire is now among the largest wildfires to have ever swept through the LA area.

It is the “largest fire on record,” Los Angeles County Fire Chief Daryl Osby said Tuesday, pointing out that the blaze is now roughly the size of Denver.

In terms of size, the Woolsey Fire isn’t quite as large as the Station Fire, which torched more than 160,000 acres of Angeles National Forest land in 2009. It also pales in comparison to some of California’s most destructive wildfires.

The Mendocino Complex Fire, which tore through Mendocino, Lake, Colusa, and Glenn counties earlier this year, was more than four times the size.

Still, few fires in the LA area have matched the scale of the Woolsey Fire, or its impact on the communities it has reached. The fire has claimed the lives of two people, while consuming nearly 500 homes and buildings so far. Firefighters now have it nearly 50 percent contained.

For historical context, here’s a look at some of the largest wildfires that have burned in the LA area.

The 16th-largest fire in state history is suspected to be the work of an arsonist. The blaze broke out near Angeles Crest Highway and burned 160,557 acres, destroying 209 structures in the process. Two firefighters died battling the wildfire.

Unseasonably hot November temperatures allowed this wildfire to spread quickly through the Sylmar neighborhood, burning through hundreds of residences in a mobile home community. No deaths were caused by the 11,262-acre fire, but more than 600 structures were lost, according to a report from the county.

This wildfire was relatively small—it burned less than 6,100 acres—but ravaged more than 500 structures in some of the nation’s wealthiest neighborhoods. Movie stars Zsa Zsa Gabor and Burt Lancaster lost their homes, while future president Richard Nixon took to the roof of a house he was renting and sprayed down the structure with a garden hose to make it more fire-resistant.

This Depression-era wildfire was barely a flareup compared to the other fires on this list, but until this month, it was the deadliest in state history. The 47-acre blaze started as thousands of workers were building and maintaining trails in the park. Workers were ordered to control the burning, but dozens became trapped in a canyon as the fire grew, and 29 of the workers died in the flames.