Posted by grant on Saturday, 15 September 2012 in Wind 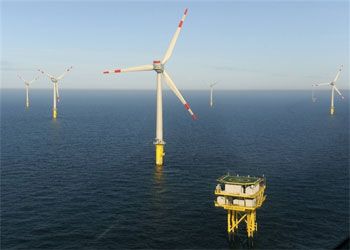 Placing wind turbines off the East Coast could meet the entire demand for electricity from Florida to Maine, according to engineering experts at Stanford University.

It would require 144,000 offshore turbines standing 270 feet tall — not one of which exists since proposals have stalled due to controversy and costs. But the analysis shows it's doable and where the best locations are, says study co-author Mark Jacobson, a Stanford professor of civil and environmental engineering.

The team is not advocating for an "all wind" approach, saying it'd be foolish to put all of one's energy eggs in a single basket, but they do think it could reach up to 50 percent. Today the U.S. gets about 4 percent of its electricity from wind, but only via turbines on land.

The first large-scale offshore wind farm was proposed in 2001 off Massachusetts' Nantucket Island. But vocal opposition, including from political heavyweights like the Kennedy family, are seeking to block the $2.6 billion Cape Wind project, arguing the 130 massive turbines would mar views and endanger boat and air traffic.