Posted by lillianbarbeito on Saturday, 16 July 2011 in Water Conservation

Why The Colorado River Stopped Flowing

Known by some as "America's Nile," the Colorado River stretches about 1,450 miles across seven states and two countries — and photographer Peter McBride has traveled the entire thing, shooting photos for his new book, The Colorado River: Flowing Through Conflict.

McBride explains the conflict in an interview with All Things Considered host Michele Norris. The delta, which was once a vast, lush ecosystem, has all but dried up. "It shows what happens when you ask too much of a limited resource: It disappears," he says.

His journey begins at Snowmass Mountain in Colorado, which, according to his book, supplies some 90 percent of the river's water with snowmelt. From there, the pages of his book wind through Utah and the majestic red rocks of Grand Canyon National Park in Arizona; past Las Vegas; down the Arizona-California border; and end in a "frothy Frappuccino pit full of plastic bottles and who knows what," he says. He's referring to the delta, about 90 miles shy of the Sea of Cortez. 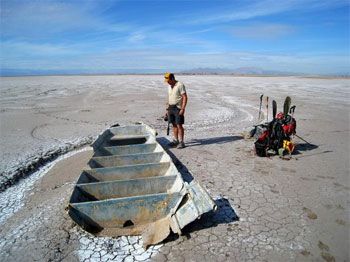 "This estuary used to be one of the largest desert estuaries in North America," McBride says. "It ran to the sea for 6 million years, and the river basically stopped in the late '90s. It used to be 3,000 square miles with lush forests and jaguars and deer. And having walked it ... it's nothing but a cracked, parched arid landscape."

How did this happen? As McBride puts it, too many straws in the water: Near Mexico, the river basically produces the entire lettuce crop for the United States in the months of November and December, and all of the nation's carrots in January and February. "So whether you love the river and fish it and float it, or you've never been to it and you live on the East Coast, you actually eat Colorado River water," McBride continues.

Certain cities are setting an example in water conservation. Las Vegas is one of the most progressive water users, McBride says. "Cash for Grass," for example, credits residents up to $2 per square foot for replacing water-consumptive turf lawns with native plants that require little water.

Though drought continues throughout the Southwest, McBride remains optimistic that the delta can be saved. "A lot of it will be about dedicating water ... so the river can be a river and not just a plumbing system," he says.

listen to the interview...

Tagged in: Colorado water use