The company that operates the largest trucking fleet in the waste industry is fueling more and more trucks with so-called trash gas. On Tuesday, Houston-based Waste Management Inc. will add its 1,000th truck fueled with natural gas. Powered with captured and converted methane gas from the company's Altamont, Calif., landfill, the new truck will service Long Beach, picking up recyclables. 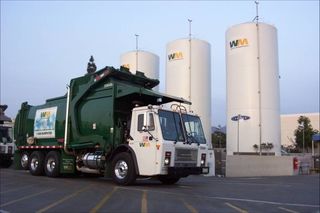 North America's largest waste services company, Waste Management operates almost 300 landfills and runs 22,000 big trucks daily, 720 of which are in Southern California. All of the trucks Waste Management runs out of its L.A. Metro fueling station are powered with liquefied natural gas (LNG) derived from the methane generated through decomposition of organic waste in its Altamont landfill. Since November 2009, the landfill has been generating as much as 13,000 gallons of LNG per day.

Later this summer, Waste Management anticipates approval of a similar liquefaction production facility at its Simi Valley landfill. If selected for funding from the California Energy Commission, the Simi Valley landfill could generate at least as much LNG as its Altamont facility -- enough to power an additional 300 trash-gas trucks daily.

"It's a big deal to hit this milestone because we've been at this for years," said Waste Management's vice president of public affairs, Kent Stoddard. "I think we're probably the first company that tried to run a garbage truck on compressed natural gas, and we went through 10 years of ups and downs, of encouraging successes and setbacks, but we crashed through all of that."

Trucks that run on CNG emit 20% fewer carbon emissions than those running on diesel; trucks that run on LNG "trash gas" emit 80-90% fewer carbon emissions than diesel, according to the California Air Resources Board. Both types of natural gas trucks emit 30% to 50% fewer nitrogen oxides -- an air toxin that contributes to smog and also negatively affects human health.

Both the Altamont landfill LNG production facility and some natural-gas trucks were funded, in part, by the South Coast Air Quality Management District, which, in 2000, established a rule requiring operators of refuse collection vehicles to convert to alternative fuel vehicles when they replaced or expanded their fleets.

"We focused our fleet rules on vehicles that have direct exposure to residents because toxic emissions are most harmful when you're directly exposed to them. These trucks run up and down residential streets," said Henry Hogo, assistant deputy executive officer of science and technology advancement for the AQMD.

Hogo said he ranks Waste Management "pretty high as a leader in the refuse collection industry. They have been very proactive with alternative fuel vehicles."