Posted by grant on Wednesday, 06 July 2011 in Climate Change

Sea Ice Is Changing Swiftly at the Poles

by fen montaigne of Yale 360

As sea ice rapidly melts in the Arctic and parts of Antarctica, the threat to creatures that use the ice as a feeding platform — polar bears and walruses in the Arctic, and Adélie penguins in the Antarctic — has been well publicized.

But these iconic symbols of global warming are merely the pinnacle of polar marine ecosystems whose foundations rest, above all, on one thing: the widespread, seasonal formation and retreat of sea ice. And as temperatures rise in the Arctic and along the Antarctic Peninsula faster than anywhere else on earth, evidence is growing that the sea ice's retreat is altering a food chain that supports a wide array of marine life, from single-celled phytoplankton to gray whales.

This intricate web of life — whose annual cycle of reproduction is kick-started every spring and summer by the retreat of sea ice and ensuing phytoplankton blooms — is facing profound shifts in that timing, upending many long-established interactions. Some creatures will benefit from the shifts, and others will lose. But one thing is certain: Many forms of polar marine life that have evolved over millions of years to live in a relatively stable, sea-ice dominated world are now facing a new, swiftly changing reality. 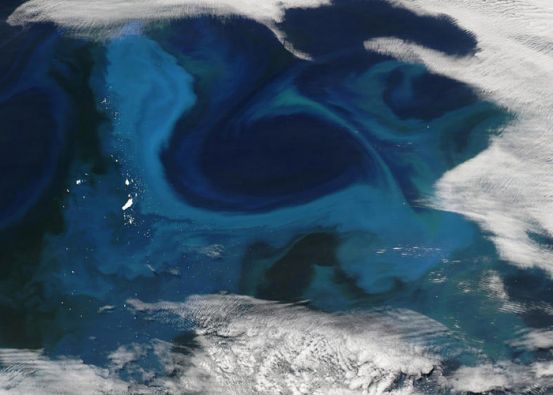 “These ecosystems are very sensitive to sea ice changes and if you change that equilibrium you might end up with a totally different ecosystem,” said Martin Montes-Hugo, an oceanographer and remote sensing expert at the University of Quebec who has studied the impact of sea ice declines on the

Creatures that have evolved over millions of years in a sea ice-dominated world are facing a new reality.

The changes in the Southern Ocean in that region are indicative of the cascade of events that ripple through polar oceans as sea ice melts. Winter air temperatures along the northwestern Antarctic Peninsula have risen by 11 degrees F in the past 60 years, and sea surface temperatures have risen by about 1 degree F — a slight but significant change. As a result of these increases, sea ice now blankets the Southern Ocean off the western Antarctic Peninsula nearly three fewer months a year than 30 years ago.

For eons, the marine world in this region has come to life every spring as sea ice retreats, exposing the ocean to the sun’s rays. Marine algae, or phytoplankton, trapped in the ice and floating in the water column have burst into life as the sun catalyzes the photosynthetic process. In addition, melting freshwater from the sea ice formed a buoyant cap atop the heavier salt water, trapping the algae in the upper layer of the ocean, where it was exposed to the sun’s rays and bloomed.

These seasonal phytoplankton blooms have fed the entire food web around Antarctica: shrimp-like krill and fish ate the phytoplankton, and virtually everything else — from Adélie penguins to humpback whales — ate the krill, which are part of the crustacean family.

Now, however, Montes Hugo and his colleagues are detecting major changes at the base of the food chain — the phytoplankton — that appear to be working their way up to top predators, including Adélie penguins. Using various records — including satellite-based remote-sensing technology that measures the chlorophyll (an indication of phytoplankton) in the water — Montes-Hugo compared phytoplankton production during two periods: 1978 to 1986, and 1998 to 2006. Over those three decades, he concluded, phytoplankton production declined by nearly 90 percent in the northwestern Antarctic Peninsula.

Montes-Hugo says the main reason for the drop is the sharp decline of sea ice during that same period. Less sea ice has meant two things. First, it has reduced the size of the freshwater layer that kept phytoplankton trapped in the upper layer of the Southern Ocean, where they bloomed when exposed to sunlight. Second, the region’s nearly three-month decline in sea ice duration means that the ocean’s surface is more exposed to winds, which stir up the water and mix the upper layers with lower layers. The upshot is that phytoplankton blooms have been sharply reduced as the algae are driven deeper into the water column, where they are not exposed to the bloom-producing energy of the sun.

The decline in phytoplankton is believed to be a major reason for a regional decrease in Antarctic krill. And that loss of krill, coupled with the shrinking of the sea-ice that Adélies use as a feeding platform in winter, is a major reason why Adélie penguin populations in the northwestern Antarctic Peninsula have plummeted by more than 80 percent in the last 35 years.

Farther south on the Antarctic Peninsula, where temperatures are considerably colder, warming has had the opposite effect. Previously, the more southerly waters off the Antarctic Peninsula were covered in extensive sea ice nearly year-round, inhibiting phytoplankton growth. But as the region has warmed and sea ice has retreated, the growing expanses of open water have actually led to an increase in phytoplankton production of more than 60 percent, which may well boost production of krill and the creatures that feed upon them.

Hugh Ducklow, who heads the National Science Foundation’s Long Term Ecological Research program on the Antarctic Peninsula, said he and his colleagues are observing another important change related to the loss of sea ice. Ducklow, a biological oceanographer who is director of The Ecosystems Center at the Marine Biological Laboratory in Woods Hole, Mass., said that Antarctica has long been characterized by a relatively simple marine ecosystem with few links in the food chain, which is dominated by large species at every level. A large type of phytoplankton, called diatoms, has prevailed, as has the large Antarctic krill.