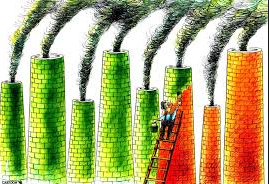 The fact that climate change is occurring around the world makes some people nervous, even a little mad.

Read more here: http://www.kansascity.com/2014/02/27/4853924/editorial-dont-ignore-climate.html#storylink=Take skeptics who cherry-pick issues — columnist Charles Krauthammer crowed this week that the numbers of bad tornadoes and hurricanes have fallen in recent decades — but then ignore the much larger evidence that points to climate change’s reality.

Deniers also whip out a line that goes something like this: Former Vice President Al Gore and scientists don’t know for certain what might happen if climate change exists.

Then there’s this tiresome tirade: “It’s freezing outside! Whatever happened to global warming?”

The National Aeronautics and Space Administration agrees that climates change all the time, as columnist George Will posited recently. But Will conveniently didn’t include this from NASA: “The current warming trend is of particular significance because most of it is very likely human-induced and proceeding at a rate that is unprecedented in the past 1,300 years.”

Using information from around the globe, the National Oceanic and Atmospheric Administration lays out compelling climate change evidence from the last century:

• The index ranking extreme weather events in the United States is at its highest level in 100 years. (Think polar vortex.)

• Sea levels are rising; oceans are getting warmer.

In a report this week, the U.S. National Academy of Sciences and the Royal Society of the United Kingdom said carbon dioxide greenhouse gases are at their highest levels in 800,000 years, caused by burning fossil fuels.

Finally, there’s actually much consensus on what some effects of climate change will be. Many are catastrophic, including more drought in America’s breadbasket and elsewhere in the world and more acidic oceans, leading to fish kills.

These facts must be valuable wake-up calls that lead to changes in how the U.S. and the world produce energy. Renewables can reduce the harm caused by fossil fuels.

Ultimately, the future costs of problems caused by climate change could be far greater than what it would take to more effectively combat it right now.