Posted by gregory on Tuesday, 15 April 2014 in Ocean/Seas/Coastlines 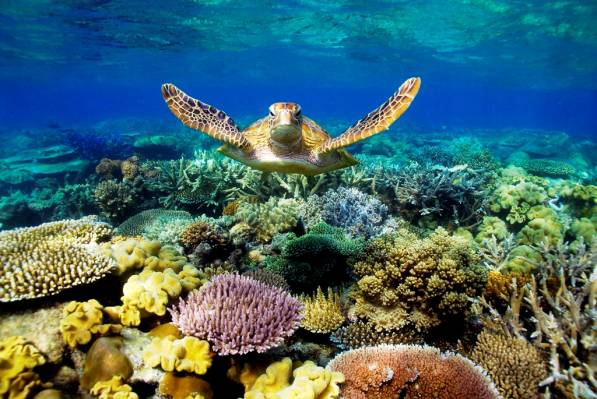 SYDNEY, AUSTRALIA—The Australian agency tasked with managing the Great Barrier Reef has authorized what amounts to an experiment opposed by many scientists: how the iconic ecosystem will respond to mountains of sludge dumped into the waters between the reef and the Australian mainland. On Friday, the federal Marine Park Authority paved the way for development of one of the world’s largest coal ports by approving the dumping of up to 3 million cubic meters of dredge spoils inside the UNESCO World Heritage Site.

The decision is “unscientific” and “shortsighted,” fumes Matt Landos, a fisheries veterinarian at the University of Sydney. He and other critics contend that the dumping will harm the sensitive ecosystem by smothering corals and seagrasses and exposing marine mammals and other organisms to toxic substances. It may also extract a political cost as well: The decision increases the likelihood that UNESCO’s World Heritage Committee will list the reef as “in danger” in May ahead of its upcoming meeting in Doha in June, Landos says. The listing would not trigger sanctions, he says, but it would be an embarrassment for Australia.

Last month, federal Environment Minister Greg Hunt signed off on the venture, in which North Queensland Bulk Ports Corp. (NQBP) would dredge at Abbot Point—located near Bowen, Queensland, midway along the reef—and dump the spoils 25 kilometers offshore, inside the marine park. Critics had hoped the Marine Park Authority would take a dimmer view. They were wrong. “I was devastated,” says Selina Ward, a coral reef biologist at the University of Queensland in Brisbane.

Hoping to persuade the authority to reconsider, Ward initiated a group letter outlining what she and others say are the plan’s scientific flaws. Signed by roughly 240 Australian scientists, the letter asserts that the best available science—including a recent report commissioned by the Marine Park Authority in which modeling showed that sediment could spread up to 80 kilometers from the dump site—makes it “very clear” that the dredging will harm the Great Barrier Reef. As a worrying precedent, they point to Gladstone Harbor, at the southern end of the reef. Dredging south of the harbor in 2010 and 2011 released copper, zinc, and arsenic into the water column; the deaths of dolphins, dugongs, turtles, and seagrasses were directly linked to heavy metal toxicity, Landos says.

Environmental scientist Jon Brodie of James Cook University in Townsville says the authority should consider mandating construction of a protective dyke at the dredging site for storage of dredge spoils. In a press statement on Friday, Bruce Elliot, the Marine Park Authority’s biodiversity manager, said that the authority acknowledges the concerns of scientists and would support an alternative option should NQBP propose one.