Posted by Cathym on Monday, 07 July 2014 in Climate Change 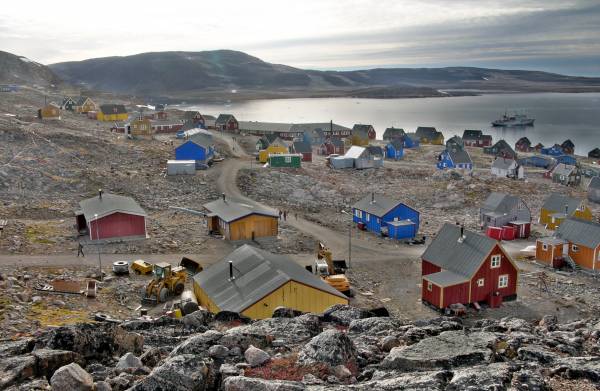 So when she said she was going to Greenland, where polar bears roam, he signed off on $500 to buy a heavy-caliber rifle.

Stearns, a glaciologist, will fly to the giant island’s northwest coast on July 14. The Rink Glacier, where she’ll camp 366 miles north of the Arctic Circle, is full of crevasses and is dangerous.

Gonzalez chairs the Department of Geology at the University of Kansas.

Stearns is one of KU’s bright young scientists, he said – and fun to debate, even when she and other scientists challenge him over how he sometimes talks about oil and coal companies.

Stearns said she’s not worried about the bears. She does worry about the climate.

She and fellow scientists who track glacier movements say the glaciers are melting because the planet is warming fast. And they say this is tricky to talk about in Kansas, because some people get upset when they do.

Gonzalez agrees. But he’s blunt in his reply.

Many scientists are narrow-minded and hypocritical in blaming all climate change on energy companies, he said.

“We need to change the conversation,” he said.

“When scientists become too passionate about our data, we fail to cast our science information in terms that people can understand and that people will listen to,” he said. “We need to take the passion out of it. A lot of scientists don’t even realize that they are taking sides. But we all take sides.”

Stearns has packed 3,000 pounds in supplies: pasta and beans, laptops, books, car batteries for her GPS receivers – and a lever-action 45-70 rifle, bought at a Cabela’s store.

“If a bear gets hungry, I’ll have four shots,” she said.

With graduate students and other scientists, including oceanographers from other universities, she’ll stay part of the time on the island of Uummannaq, in a town of the same name that’s a community of Inuits.

“They are friendly, they all have cellphones, and they all know how to skin seals on their front porches,” she said.

From Uummannaq, she and others will take a helicopter frequently to the Rink Glacier. On some days, they will camp beside it and sleep in daylight when they get tired, because daylight in summer lasts all day, “light enough to read by.”

Temperatures drop from 50 at midday to 30 to 40 degrees at night during the summer. The crevasses – cracks in the glacier’s surface – make even taking a few steps across glaciers dangerous. “We’re useless without the helicopters,” Stearns said.

Since 2005, Stearns has gone to Greenland 10 times, Antarctica 10 times and Alaska twice. She plants GPS receivers on glaciers, and the data from those receivers inform the scientific world how fast the glaciers flow. Oceanographers working with the team test and study the seawater into which the Rink Glacier’s ice flows.

As the planet warms, Kansas will see more severe drought and heat waves and sometimes way-too-heavy rains, she said.

What it likely means for New York City, where she grew up, are sea levels a meter higher than now by the end of this century.

KU has several scientists who are tracking climate change. Many people in Kansas don’t like to hear what they have to say, Gonzalez said.

That situation, he said, can have a direct impact on the geology department he chairs and the university he works for.

Some Kansas legislators, people who help determine KU’s state funding, don’t like to hear that climate change is man-made, he said. And 80 to 90 percent of geology department alumni – the alumni Gonzalez wants to approach when the department needs new buildings or other help – are employees at fossil fuel companies.

And Gonzalez, who does some climate research himself, thinks they are right to feel unfairly treated.

He’s not a denier. He thinks the climate scientists are right about the warming. And that human activity is the driver. And that the consequences will be dire.

But he believes climate scientists have demonized the fossil fuel companies and unfairly targeted them to bear all the costs of fixes.

“We have climate change because we like to sit around in our shorts in the wintertime with the heat turned on.”

Besides Stearns, Johannes Feddema is one of the people at KU studying planetary changes. Feddema, a climatologist, was a contributing author to the 2007 report on climate written by the Intergovernmental Panel on Climate Change, a scientific body under the auspices of the United Nations. The panel was a co-winner of the Nobel Peace Prize with Al Gore.

KU has said in prepared statements that some of the leading research informing world climate change science comes from KU, including from the Center for Remote Sensing of Ice Sheets, which Stearns helps serve. KU scientists study atmospheric science and work with oceanographers. Several besides Stearns go to glaciers worldwide and use everything from satellite imagery to remote sensing to ice core analysis to drones to helicopters to sleds. David Braaten, the center’s deputy director, has said a 1-meter rise in sea levels will displace at least 100 million people worldwide.

Gonzalez himself is a scientist who can read thousands of years of climate variation in the mineral evidence he extracts from cave stalagmites. He has seen what’s in there and says climate change is caused by us, that more carbon got into the air and changed things after human civilization ramped up about 3,000 years ago.

But most of these scientists don’t belabor anybody about climate change, Stearns said. “I don’t like to argue for things that are outside my field.” Most scientists just do their field work, study their models and write data-driven reports, she said.

The expedition she and her collaborators are about to start in Greenland is funded mostly with a $1.5 million grant from NASA, which does the work, she said, to scout out the health of the planet.

The data about climate change is conclusive, she said.

“We have done irreversible damage, and we need to be aggressive about what we change,” she said.

“I can understand people criticizing us,” she said. “But if a person finally found that missing piece of data that finally proved everyone is wrong, science would run with it. Science would publish that paper.

“And it would become the most-quoted scientific paper of all time.”

The lights were on

But scientists can be right about data and still get the argument all wrong, Gonzalez said. Tying it too strongly to fossil fuel companies, when they are only doing what markets and people want them to do, is a losing proposition, for science and for everyone, Gonzalez said.

It’s also hypocritical, he said, for climate scientists to drive to work in gasoline-powered cars, turn on office lights and computers lit up with coal-company power and blame energy companies for planetary harm.

Stearns says he has a point. When she flies those thousands of miles to Greenland in a military plane powered by aviation fuel, “I feel guilty every time.”

“I worry that there is a prevailing hatred of the oil industry, including from scientists inside geology departments that derive part of their money from oil companies,” Gonzalez said. “That hatred has blinded us from looking at all the scientific data.”

People in the environmental movement, he said, like to say they promote green energy by driving with ethanol-fueled or electric cars. But the corn that creates ethanol is usually planted by farmers driving gasoline or diesel tractors. And plugging in to recharge an electric car always means plugging into an electrical system powered by coal, he said. It’s absurd to then blame coal companies for warming the planet, Gonzalez said.

Even one of Gonzalez’s own occasional KU critics says he’s right about that.

Feddema has sometimes challenged Gonzalez’s views on fossil fuel companies. The two scientists work in the same building and say they respect each other. But in general, Fedemma said, he thinks Gonzalez and other university leaders worried about fundraising and university finances have at times “catered too much” to the influence and the views of legislative and corporate critics of climate change science.

But in his office, when asked about how he got to work that morning, Feddema grinned and said he’d driven a car.

“And look around you,” he said, waving his hand toward his computer and his office lights.

“You can see the hypocrisy.”