Posted by wally on Thursday, 20 November 2014 in General Environment 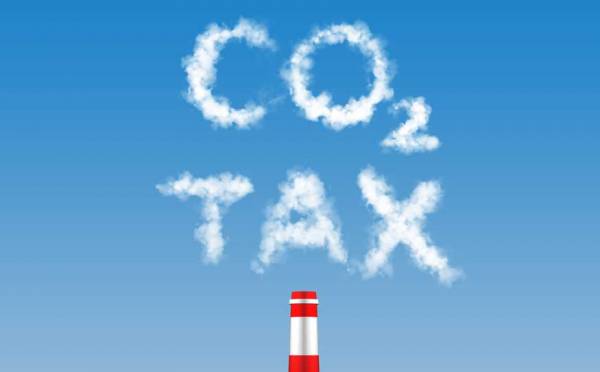 Fresh off their legislative victory against the Keystone XL pipeline, Democratic senators are pushing a bill that would tax carbon dioxide emissions from fossil fuels that would rise every year.

Democratic Sens. Sheldon Whitehouse of Rhode Island and Brian Schatz of Hawaii first introduced the American Opportunity Carbon Fee Act Tuesday. The bill would slap a $42 per ton fee on carbon dioxide emissions in 2015 that would gradually rise 2 percent each year.

Democrats argue it would raise $2 trillion, which could be used for things like paying down the national debt or funding green energy production. The tax would be levied on fossil fuels produced domestically or imported in the U.S. and cover large emitting facilities, possibly power plants or refineries.

“Right now we are subsidizing big polluters to the tune of hundreds of billions of dollars annually by allowing them to pollute for free,” said Whitehouse. “We all pay the costs of this subsidy through higher health costs, property damage from rising seas, warming waters that affect our fishing industry, and more.”

The carbon tax bill would follow the Obama administration’s “social cost of carbon” estimate, or SCC, which puts a monetary value on the costs to society per ton of carbon dioxide emitted. The idea is that the more carbon dioxide that is emitted, the more the world warms and impacts human health and the environment.

“With this bill we can take control of our economic future,” said Schatz. “This is one of the most straightforward solutions to climate change, and has growing support across the ideological spectrum.”

There is virtually no chance the Schatz and Whitehouse carbon tax will clear Congress. Its chances will get even worse when Republicans take over the Senate next year.

Republicans have vowed to continue to press the White House on Keystone XL pipeline approval and Environmental Protection Agency regulations aimed at closing down coal-fired power plants. But Schatz says he’s confident Republicans will eventually come around to his proposal.

“Republicans in the Congress are going to take some time to warm up to this proposal, but I am confident that they will listen to their consciences and their constituents, and join us on the right side of history,” Schatz said.

Conservative groups have long worried Republicans could be seduced by a carbon tax in exchange for goodies like lower corporate tax rates or even a repeal of the EPA’s global warming rules.

“A carbon tax is the kiss of death for any politician,” Dan Kish, senior vice president of policy at the Institute for Energy Research, told The Daily Caller News Foundation. “It exposes the climate gimmick for what it always has been… another way for greedy fat cat politicians, lazy decadent socialist governments and some companies to justify sticking weary taxpayers yet again with yet another bill.”

“Republicans should not be suckered into another bad deal by devious tricksters like Sen. Whitehouse,” Kish said.

“A carbon tax couldn’t even pass a Democrat majority for an obvious reason – it’s a bad idea,” Louisiana Republican Sen. David Vitter told TheDCNF in a statement. “It’s not just energy prices that would skyrocket from a carbon tax, but the cost of nearly everything built in America would go up. And let’s not lose sight of how big of a dud cap and trade was in 2009, or as it came to be known — cap and tax.  For some reason Democrats continue to ignore what a disaster these ideas have been for Europe.”

Senate Republican Leader Mitch McConnell has vowed to take on EPA rules he says are harming Kentucky coal miners. Democrats could offer a carbon tax in exchange for agreeing to repeal the EPA’s anti-coal rules.

But environmental groups have argued the carbon tax could be used in conjunction with the EPA’s power plant rule, which aims to cut plant emissions 30 percent below 2005 levels by 2030.

“Their bill could be a useful complement to the Clean Air Act and other laws the president is already using to curb carbon pollution,” said David Goldston, government affairs director at the Natural Resources Defense Council. “Nothing must be allowed to interfere with the success of the Environmental Protection Agency’s proposed standards to curb dangerous carbon pollution from power plants, which can produce substantial progress now under existing law.”

Democrats, however, may be taking a big political gamble by pushing a carbon tax. Last year, Australia’s left-wing government was thrown out, in part, because of their implementing a carbon tax. Aussie right-wing politicians blamed the tax on unemployment and energy price increases.

“I should say that at the election, we said to the Australian people, we said to you, that we wanted to build a strong and prosperous economy for a safe and secure Australia, and every day that is what we have been working to bring about,” Prime Minister Tony Abbott said in a press conference following his government’s repeal of the carbon tax in July.