The world’s largest primate is being wiped out by war 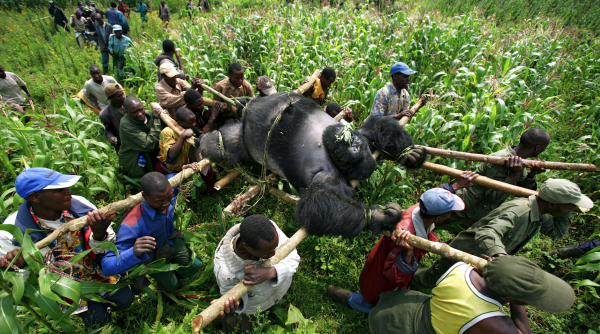 The population of the world’s largest primate – a gorilla subspecies that lives in a region of Central Africa beset by conflict – is collapsing.

Back in 1998, a team of researchers estimated that 17,000 Grauer’s gorillas, also known as eastern lowland gorillas, lived in the forests of eastern Democratic Republic of Congo.

Since then, the population of Grauer’s gorillas has dropped by 77 percent.

Fewer than 3,800 of these gorillas still live in the wild, according to an alarming report published this week by the Wildlife Conservation Society, Flora and Fauna International and the Congolese Institute for the Conservation of Nature.

The gorillas have been impacted by civil war in the DRC, the establishment of mining camps to fund militias and subsistence and bushmeat hunting to feed miners, according to the report.

The recent conflicts in the country began in the wake of the 1994 Rwandan genocide, when refugees poured into eastern DRC. An estimated 5 million people died in Congolese civil wars.

“The crash in the gorilla population is a consequence of the human tragedy that has played out in eastern DRC,” report co-author Jefferson Hall, a staff scientist at the Smithsonian Tropical Research Institute, said in a statement. “Armed factions terrorize innocent people and divide up the spoils of war with absolutely no concern for the victims or the environment.”

Just as humans have been impacted, so too has the region’s wildlife. Mineral-rich Congo has seen a rapid expansion of artisanal, or subsistence, mining. And while the Grauer’s gorilla is legally protected, it’s still hunted; the gorilla’s large size (some of these animals weigh more than 400 pounds and stand more than five feet tall) means one kill can feed many miners who often live in remote areas, far from villages and towns.

The Grauer’s gorilla’s entire range “has been consumed in conflict” since 1996, according to the report. “This has resulted in an almost complete breakdown of government control, including wildlife protection activities.”

This has resulted in an almost complete breakdown of government control, including wildlife protection activities.

Grauer’s gorillas are closely related to another subspecies: mountain gorillas. Those animals live in parts of the DRC, Uganda and Rwanda, in a region called Africa’s Western Rift Valley.

Fewer than 700 such gorillas are thought to live in the wild, and rangers in Congo’s Virguna National Park face mortal danger from rebels and poachers as they try to protect the endangered animals. More than 150 rangers have been killed over the previous two decades.

“We have seen, over and over again, dedicated Congolese conservationists risk their lives to make a difference,” said Hall.

The Grauer’s gorilla has been categorized as “endangered” since the 1980s on the International Union for Conservation of Nature’s Red List of Threatened Species. Given this new population estimate, the report authors recommend listing the Grauer’s gorilla as “critically endangered,” which is just one step below “extinct in the wild.”

The new estimate comes from using the baseline data gathered by Hall and others in the 1990s and incorporates recent data collected from surveys conducted by local communities and rangers.

Conservationists say it will take a lot of work to stop the dwindling gorilla numbers.